In this post we will learn how to weave a small Double Weave blanket suitable for baby or as a light summer throw. Our 38″ wide project will be woven on a 24″ Harp Forte Loom. Please refer to the previous post, Double Weave Part 1 – How to Warp a Second Heddle, to learn how to set up the loom. Already done that? Then let’s begin!

As with any project we will begin with a plain weave header woven out of waste yarn. In order to get a plain weave with the double heddles in place, we will use them as one. Lift both heddles up together and pass the waste yarn through the shed and then push both heddles down to get the opposite shed. Weave a couple inches of plain weave. 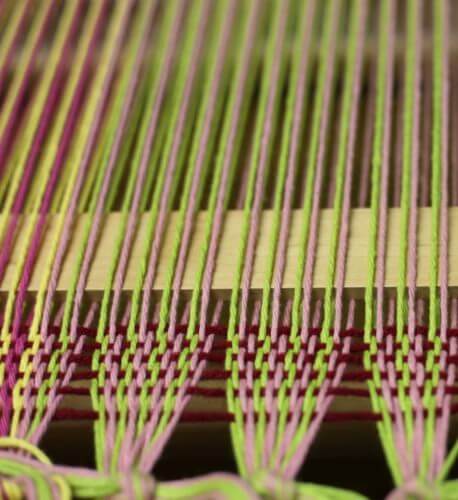 To set up for weaving we must first insert 2 pick-up sticks which will help create the additional sheds necessary to weave double weave. With both heddles in the down position, place a pick-up stick into the shed. Use a second pick-up stick to pick up the top threads, in this case, the green, yellow and bright blue ones. Notice how the threads group in sets of 2. If you were not using a contrasting yarn, the threads that need to be picked up are the ones to the left of each pair. It is important not to forget the single thread on the far right as well. 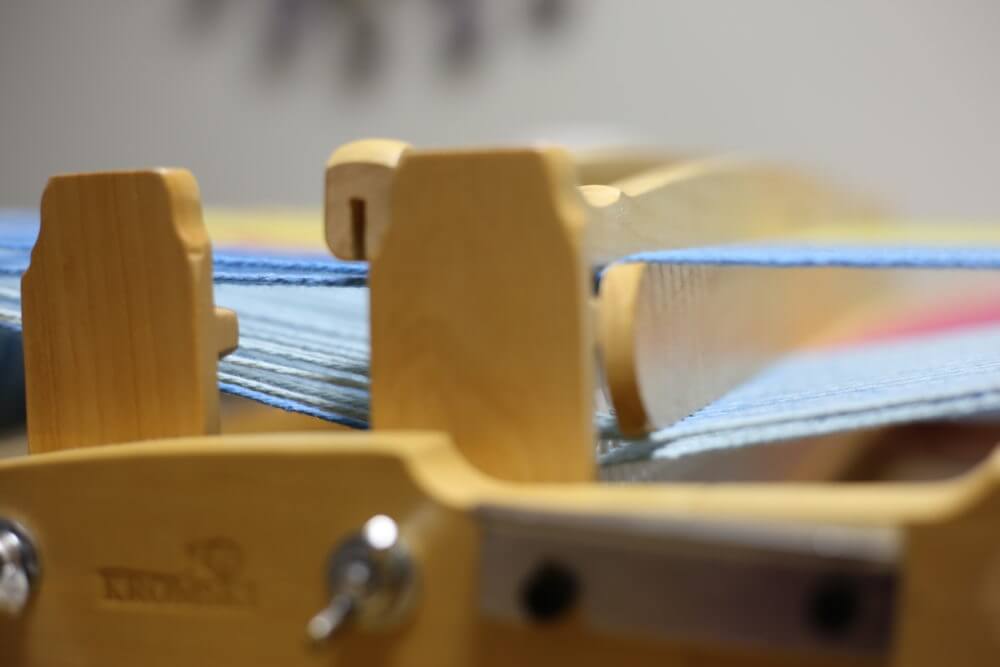 Tilt the 2nd stick up and slide it up next to the front heddle. Bringing the rear heddle towards the front one will give you a wider shed in the rear. Remove the first pick-up stick and place it behind the rear heddle in the shed created by the other pick-up stick. Now remove the stick from the front. The rear stick should have 1/2 of the top threads on it – the ones that are in the slots. The other top threads are running through the holes in the back heddle. 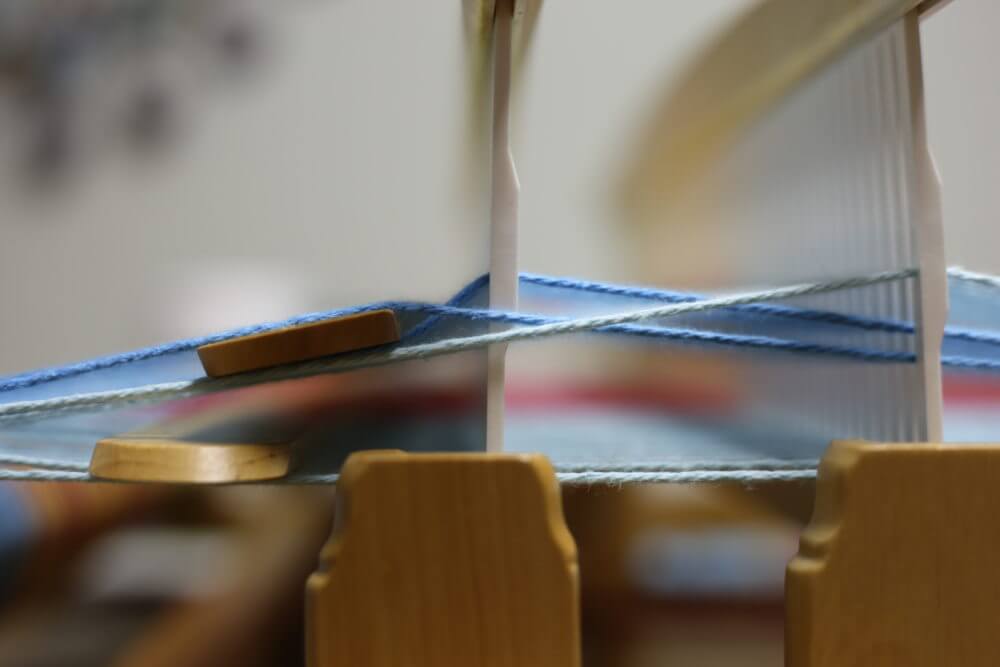 To set the second pick-up stick in place, put both heddles in the ‘up’ position. Bring the pick-up stick towards the rear heddle, and slide the second one in the shed that is created. In the photo above, the top stick is the 1st one that we placed and the bottom one is the one that we are adding in this step. 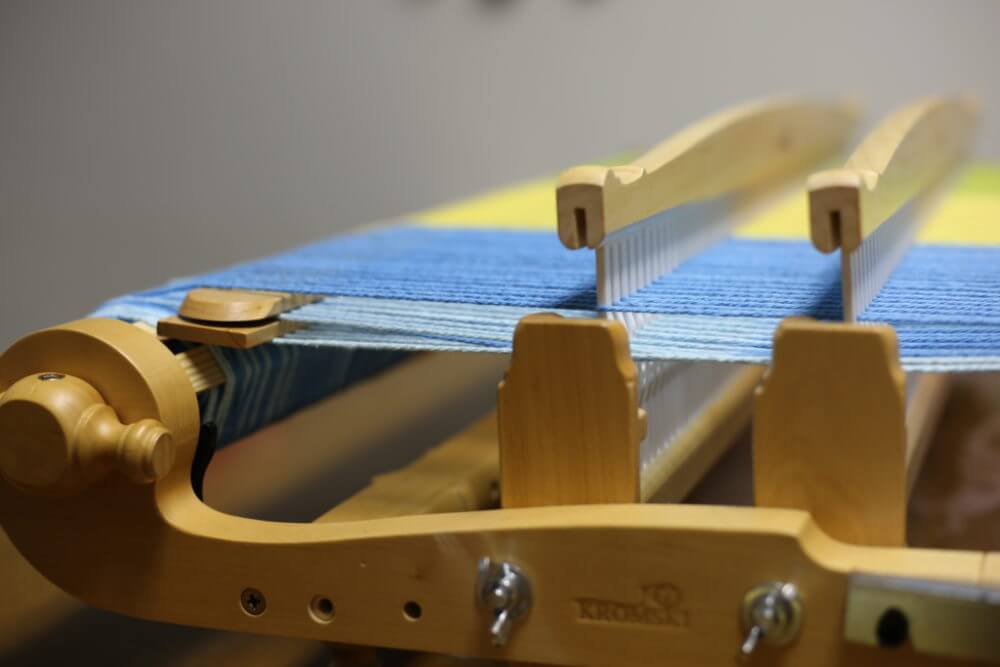 From this point forward the pick-up sticks will be referred to as ‘A’ and ‘B’. This is easy to remember if you think ‘A’ as being Above (the top stick) and ‘B’ as the Bottom (lower stick).

H1 refers to the front heddle and H2 the rear.

The 4 step sequence is as follows: 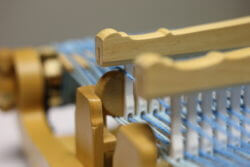 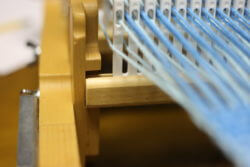 The 1st step of the sequence. ‘B’ is in place. The 2nd photo shows how to set the heddle on the edge of the block. 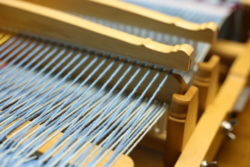 ‘B’ in place shown from the rear.

For our draft the weft pattern begins with 20 picks of white. This translates to 10 repeats of the weaving sequence. Remember, each repeat of the weaving sequence will weave first on the bottom layer, then the top layer is woven across and back, followed by the return pick of the bottom. This is 4 passes of the shuttle yet each layer only grows by 2 weft threads. The yarn we have chosen makes it easy to count should you loose track. Count the weft threads on the top layer only. There should be 20 even though the shuttle has passed 40 times. 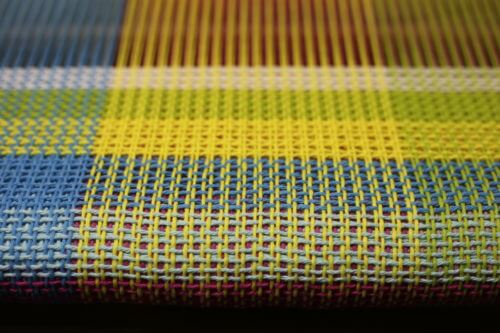 You should now begin to see how the fold in the fabric is formed. 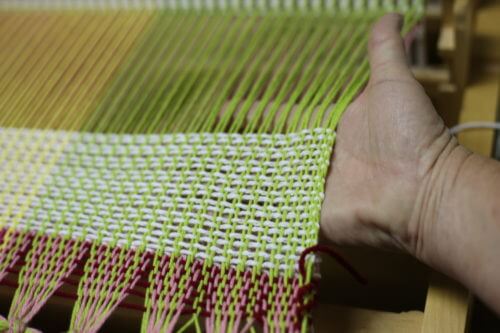 On the right the fabric should be open. 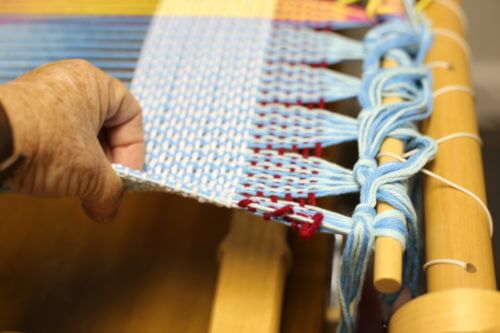 On the left side of the loom, there is a fold. As you weave the pay close attention to the salvages, particularly on the folded edge. It is very easy to crowd the threads as the weft wraps around the fold.

After the white section,  weave 4 repeats with light pink (8 weft threads). Do not try to weave in the ends as you go. It’s much easier just to sew them in after it comes off the loom. Continue with the same number of repeats of bright pink, light blue, dark blue, yellow then green. Weave 26″ with white. Finish off by reversing the color order above. Start with 4 rep/8 weft green and end with the light pink.

As you weave check periodically to be sure the right side is still open and the fold is intact.

Because of the way the fabric is folded, it is very difficult to work a sewn hem while on the loom. Finish the weave with a few inches of waste thread. Weaving this in sequence will make it easier to finish the edge because the blanket can be opened up on that side.

You are now finished weaving! Cut the blanket from the loom, leaving ample yarn for fringe or hemming.

Since the header was done in a basic plain weave, the blanket will not unfold on that end. Lay it on a table and carefully remove the waste yarn as you tie the warp ends together to keep the weft from unraveling. Then amaze yourself when you unfold it and see how large a project you can weave on a Harp Forte Loom! 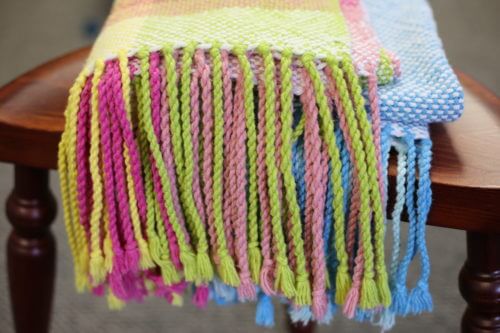 I finished off our blanket by tying the warp into groups of 4 threads and then twisting them into fringe. If this were to be an actual baby blanket, I would have done a folded and sewn hem for safety reasons.

Because this is cotton fiber, the blanket should be washed in hot water and then machine dried on high temperature. This will cause it to shrink a fair amount and fluff up the yarn to make a lovely soft and cuddly blanket.

This is a really fun project. I hope we have helped to demystify Second Heddle Warping and Double Weave!

Subscribe to our newsletter below and never miss new patterns and tutorials!