One of the most unique features of the Kromski Harp Forte is the built in Warping Board. The removable pegs fit neatly into the back of the frame, saving you both money and space.

In this tutorial you will learn how to use the warping board on your next project, or maybe you’d like to warp along with us as we set up and weave some Spring inspired kitchen towels.

For this project we will be using 3/2 mercerized cotton and a 12 dent heddle on the 24″ Harp Forte.

We’re looking to achieve 2 finished towels, each measuring 19″ x 27″. Each towel will include and additional 2″ on either side to be used for hemming. In order to determine the length of warp needed, add 27+4 (towel plus hem) = 31. Multiply this by the number of towels, in this case 2 and we now have 62. After adding 15″ for loom waste our total is 77″. To this we need to add 10% for take-up and shrinkage, which gives us a total of 85″ ( I rounded 7.7 up to 8 for ease) or 2.36 yards. It’s always better to have too much warp rather than not enough, so I’ve rounded it up once again for the final total of 2.5 yards of warp needed to weave 2 towels.

The towels should measure 19″ in width, so after adding for take-up and shrinkage, (and rounding up again) we know to weave 21″ in the heddle.

Because the 12 dent heddle is being used, multiply 12 x 21″ to arrive at 252 ends. In other words, we need 252 threads running through the heddle to create a 21″ wide woven fabric.

The draft for this pattern is:

Phew! Now on to the Warping Board.

In order to determine where to place the pegs to wind a 2.5 yard warp, you will 1st need to make a guide string. Use a color different from that of the warp and measure out 2.5 yards which should include a loop on either end. 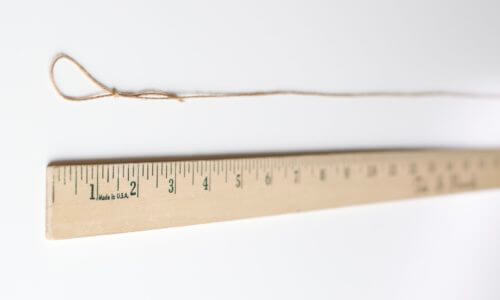 Next, configure the pegs in such a way as to hold the guide string. This may take a few tries to achieve the correct position based on the length of the project. When placing the guide, keep in mind that you will need to create a cross around 2 of the pegs.

Here the guide begins in the lower left and will use the 2 pegs following to create the cross. 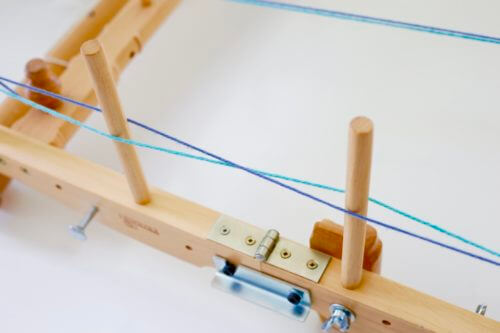 In this example, the lighter blue is the guide. The dark blue is the return pass which follows the “u-turn” described below. 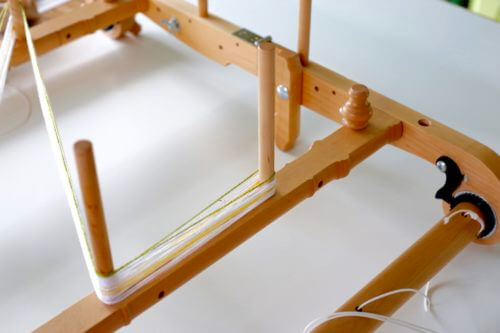 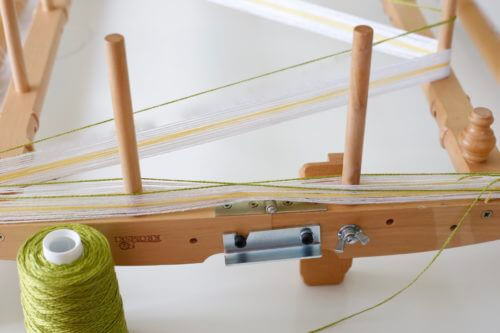 Wrap around the 1st post keeping the threads parallel near the peg and repeat the process for the desired number of warp threads. Each pass is one warp end. In the above photo for example, there are 2 green warp threads.

Be carful to create the cross on every pass of the warp thread. This is crucial to a successful warp! 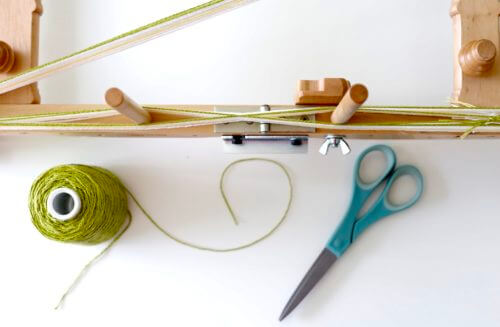 Tie off each color by making a loose loop around the peg before moving on to the next color.

The warp threads should lay neatly on top of each other, not all bunched up at the base of the peg. 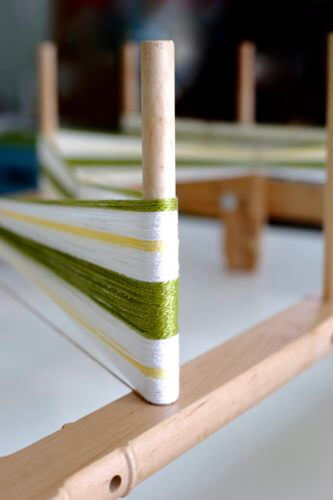 If the warp has long sections of the same color, it may be helpful to use a bit of string tied in a half hitch to count off groups of  threads as you go. However, this should not be necessary for this particular project as the thread counts are not overly high. 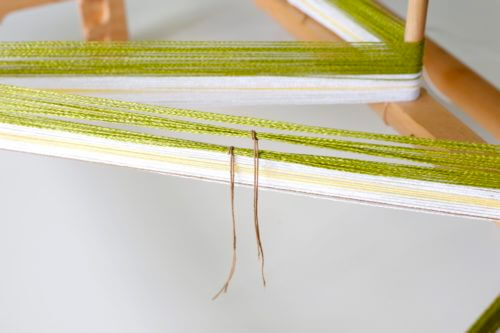 It is better to divide the warp into several sections rather than try to put it all on the board at once. For this project I have made 3 chains, or groups of warp threads.

Before removing the thread from the Warping Board, it must be secured by tying it in several places. The most critical tie is the one that holds the cross. Tie it loosely, so that the treads can move, with a secure knot. 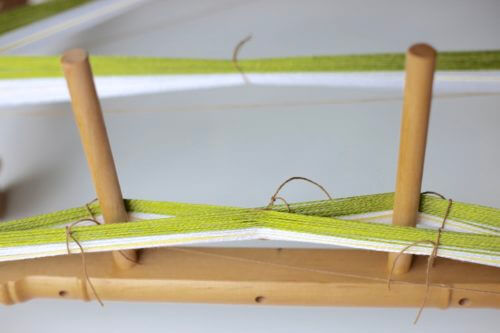 Then tie the warp on either side of the cross pegs.

Continue to place ties throughout the warp and one at either end. Be carful not to catch the guide string in the tie! 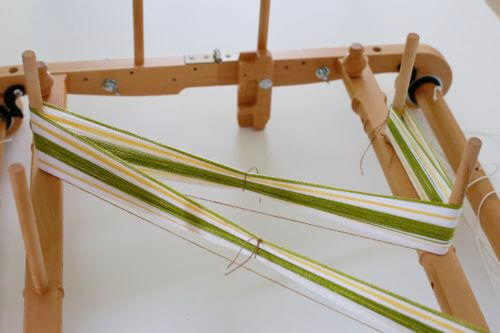 Once all of the warp has been wound, and is off the Warping Board, it’s time to put it on the loom.

Determine which heddle space will correspond to the outer edge of the weaving.  Do do this, locate the center of the heddle and then count outwards.  Mark it with a bit of thread. This is where the threading of the heddle will begin. 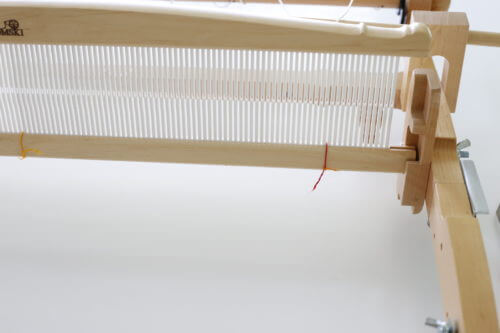 Place the Warping Dowel into the Warp Helper near the back beam.

Pick up the warp chain, placing 4 fingers though the end, just above the cross. Place your thumb through the space below the cross. Once you have a firm grasp on the warp, remove the ties at the end of the chain and around the cross. Pull firmly to loosely snug the loop around your hand so that you will have better control. 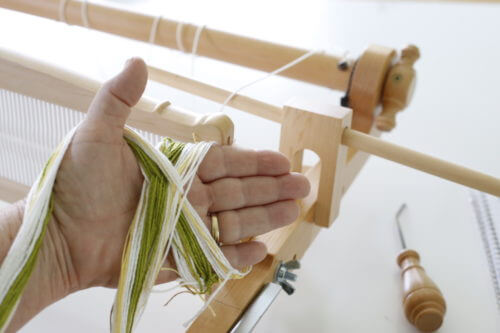 Be careful not to lose the cross. 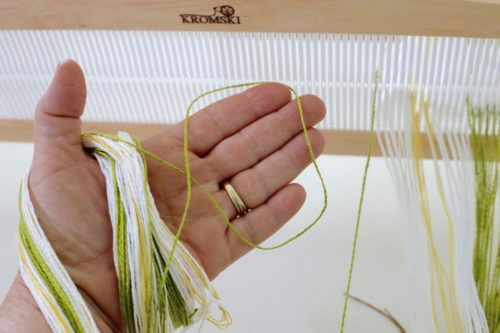 Now a single loop can be lifted from the group, drawn through the heddle and placed onto the dowel. 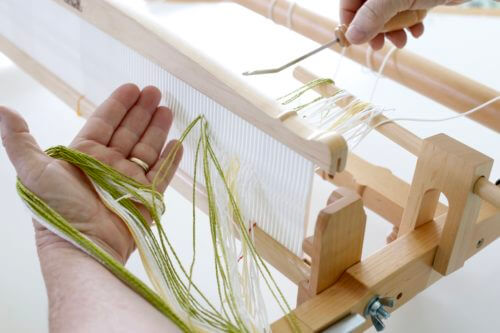 When the yarn changes colors, you will have two loops that formed the cross. Place both ends through the slot as though they were one continuous loop. 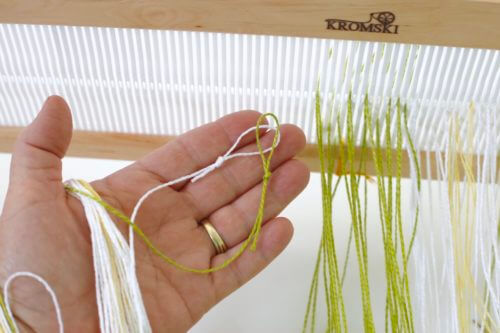 Continue to lift one loop at a time until the last loop is in place. Don’t forget to slide the dowel strings onto the dowel as you work. 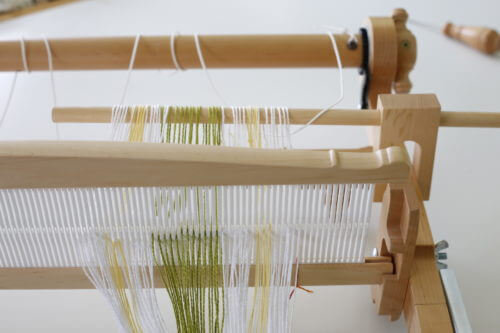 Next, it’s time to wind the warp. See our post “How to Warp the Kromski Harp Forte” for more information on how to finish dressing the loom. 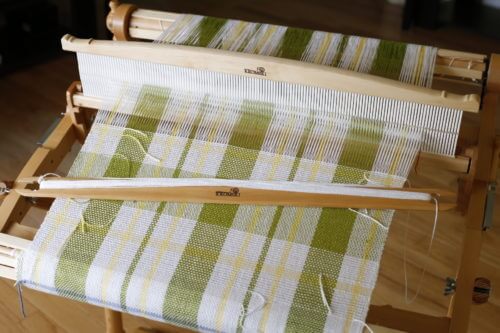 Weave 2 passes of a contrasting yarn before weaving the second towel to separate them.

Sew the loose ends of the fabric where it comes off the loom with a zigzag stitch and a strait seam (to prevent fraying), Trim excess loom waste, leaving an inch or so of fringe before washing and drying by machine. Then separate the 2 towels, trim the fringed, and hand stitch the hems. 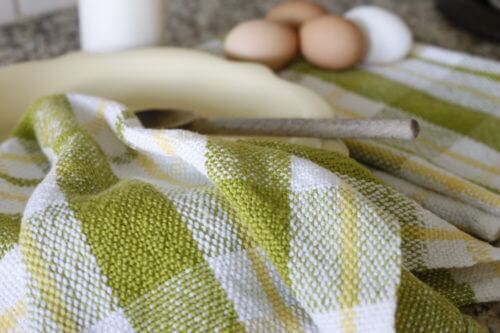 Subscribe to our newsletter below and never miss new patterns and tutorials!